More than just a significant biography of “Canada’s band”, Michael Barclay’s The Never-Ending Present places the Tragically Hip within the cultural and national shifts of Canadian consciousness over the last thirty years.

In the summer of 2016, more than a third of Canadians tuned in to watch what was to be the Tragically Hip’s final performance, broadcast from their hometown of Kingston. Their music defined a generation of Canadian rock music, selling millions of records. But the five men were always more than just a band: they were a vehicle for conversations about Canadian culture, about poetry, about performance, about hockey, about America. In the summer of 2016, those conversations expanded to include camaraderie, aging in art, reconciliation, and death.

Barclay started interviewing the band’s peers and friends that summer for Maclean’s magazine. “The discussions were joyous and reflective and hilarious and heart-breaking.” he says. “I realized there was so much more here than just the story of a hard-working, successful rock band. This book is partially that, but it’s also about issues that resonate with music fans of all kinds, and with people who just tuned into the final show out of curiosity.

“The title comes from a song on Gord Downie’s first solo album. To me it represent the Hip’s ethos: the most important time is right now. Get to work on the next record, the next tour. At every gig, something could happen that will never happen again. At the same time, the past is always with us: songs written 30 years ago can still sound fresh today. They can instantly trigger memories, or introduce new ones, no matter how old the music is. Finally, I was writing this book while its subject was living with terminal cancer, a liminal state where one has no choice but to live day to day, which Gord Downie did until his final days, writing and creating and advocating as much as he could – as he always had, in the never-ending present.”

Michael Barclay is on a book tour right now and will be stopping in Regina on October 31. I will be joining him in conversation on stage and that is a bit terrifying. There will also be some local musicians from Rah Rah, Tiger Charmer, Bryce Van Loosen, Tyler Gilbert and Tiny, led by Dustin Ritter playing some Hip favourites for us.

There are only a couple dates left on the tour with Saskatoon on October 30th, Regina the 31st and Winnipeg on November 1st. I found the book very interesting and enjoyable. While the band declined to be a part of it, there were interviews with friends and colleagues and a lot of research done to give us a look at Gord and the band and what was happening in the world around them as the albums were made and they were touring. I am looking forward to hearing what Michael has to say about his book. 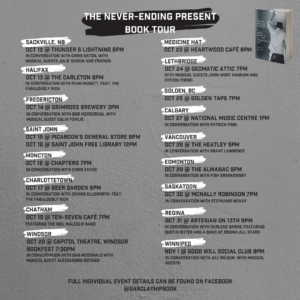